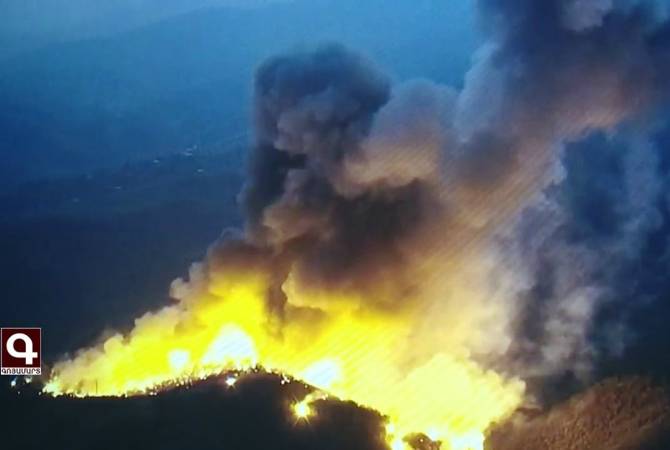 While the U.S. and other countries issue messages of support but no aid, Armenians face ecocide and the potential for another genocide in their ancestral lands, lands they were forced to leave on November 15, 2020.

Azerbaijan, with the aid of Turkey, attacked the autonomous region of Artsakh (Nagorno-Karabakh) on September 27. For 44 days, civilian populations in Artsakh, an ancient Armenian region, faced constant bombardment from cluster munitions. Azerbaijan dropped white phosphorus on the forests of Artsakh, as video evidence shows.

In the Caucuses, history impacts present-day life. In 1918, the country of Azerbaijan came into being after the Russian empire fell. The country consists of lands stolen from Armenians, Georgians, and Iranians. The name of the country comes from a region in Iran. From 1918 to 1921, Azerbaijan was an independent country. Stalin gave control of Artsakh to Azerbaijan in 1921. That same year, Armenians in Artsakh faced massacres by Azeris, and 35,000 Armenians died. This occurred just a few years after 1.5 million Armenians died during the Armenian genocide, perpetrated by the Turks. The Azeris are a Turkic people.

Turkey and Azerbaijan: A tale of two dictators

Turkey supplied Azerbaijan with arms, including the drones used to drop cluster munitions on civilians and white phosphorus on forests. Turkey also sent thousands of mercenaries to Artsakh, mercenaries Turkey paid to fight Armenians. While Armenia is a democracy, Freedom House grades Turkey as 32 out of 100 on its Global Freedom Scores and labels it not free. President Recep Erdogan’s Justice and Development Party (AKP) has ruled Turkey since 2002. A 2016 attempted coup caused Erdogan to crack down on opposition while constitutional changes in 2017 further concentrated his power.

Azerbaijan has been ruled by the Aliyev family since gaining independence from the Soviet Union in the early 90s. Ilham Aliyev has served as president since 2003. In recent years, the Aliyev regime cracked down on civil liberties. In 2017, President Aliyev appointed his wife, Mehriban Aliyeva as vice president, a position created with little to no public consultation or parliamentary debate. Freedom House grades Azerbaijan a 10 and labels the country not free.

Within both Artsakh and Armenia lie primeval forests which contain biodiversity unseen in the rest of the Caucasus region. The forests contain 6,000 plant species, 153 mammal species, 400 bird species. The Foundation for the Preservation of Wildlife and Cultural Assets (FPWC) established the Caucasus Wildlife Refuge (CWR) in 2010. Extending from the Azerbaijan border to Artsakh through two provinces of Armenia (Ararat and Vayots Dzor provinces), it is about 74,131 acres. Critically endangered species such as the Persian leopard and the Armenian mouflon are spotted there. Only about eight to 13 individuals of the Persian leopard remain in the region. Some of the oldest juniper forests remaining in Armenia are located in the CWR.

The white phosphorus Turkish drones dropped on Artsakh amount to ecocide. The Artsakh Human Rights Ombudsman noted on November 3 that 4485 acres of forest area in Artsakh had burned “but fires continue in various areas and there is a tendency for rapid growth.” The Ombudsman characterized the fires as an “environmental catastrophe, which undermines the environmental security in the region and contains long-term dangerous consequences for the life and health of the people of Artsakh.”

While white phosphorus causes forests and other vegetation to burn, it is also toxic.  The U.S. Environmental Protection Agency (EPA) characterizes white phosphorus as “extremely toxic to humans.” It can cause severe effects on the kidneys, liver, cardiovascular system, and central nervous system.

There is something else the organizations noted in their statement. During the recent war, Azerbaijan committed documented war crimes, including “beheadings of Armenian soldiers, the killing of civilians in a city square wrapped in Armenian flags, deliberate attacks on civilian infrastructures – residential buildings, churches, food markets, schools, and maternity hospitals.

The war crimes echo the Armenian genocide when the Turkish government killed Armenian men throughout Western Armenia (present day Eastern Armenia) and deported the remaining population, marching them to the Syrian desert without food or water. The author of this article is descended from people who fled the genocide.

On November 9, the news of an agreement between Armenia and Azerbaijan stunned Armenians all over the world. The reason for the collective shock is that Armenia agreed to hand over parts of Artsakh to Azerbaijan. What that means is that Armenian lands will be handed over to the very people that caused ecocide within the region’s forests. What remains of Artsakh will be surrounded by Azeris. If history serves as a prophet, massacres of Armenians will take place.

The non-profit organization, Armenian National Congress of America (ANCA) urges the Trump administration to re-engage in the Minsk Group process, which brokered the agreement between Armenia and Azerbaijan, and re-negotiate the treaty. Armenia signed the agreement without the participation of two of the three chairs of the Minsk Group (Russia and the U.S.). Only one chair (Russia) participated.

There is something you can do. You can sign up to receive action alerts from the Armenian National Congress of America (ANCA) where you will be instructed to email or tweet to your elected officials. Stand with Armenians in condemning the attacks by Turkey and Azerbaijan and convince them that there are non-Armenians who care.